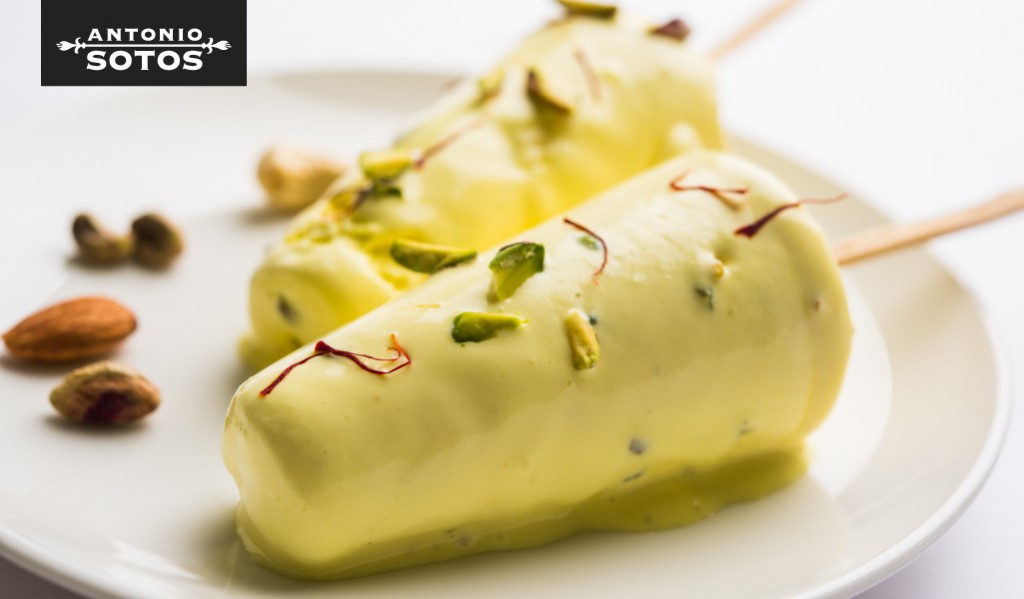 Perhaps you have never heard of it, but Kulfi is an ice cream of Indian origin, although it is also popular in countries such as Pakistan, Nepal, Burma and the Middle East in general.  Its main ingredient is milk, and despite being an ice cream, it does not have the same texture as those that we are used to in Spain, as it is denser, creamier and sweeter.

We’re bringing you this succulent dessert, which can also be made in a Thermomix.

Once the pistachios are peeled, chop and set aside.

Place the saffron and the cardamom (if it has been decided to use that spice), together with the sugar into a mortar , and then crush. Another option is to use a coffee grinder, previously cleaned of course.

In a bowl, add the whole milk, evaporated milk and egg yolks, together with the ground spices, and stir until well mixed.

Then beat the cream using a whisk, until a consistent texture is obtained, add the milk mixture and carefully mix together, in circles, so that the cream does not its soft peaks.

Add the chopped pistachios and once again very carefully mix together.

Now, the Kulfi can be poured into ice cream molds,  or in ice cream glasses for serving on a plate, or in the form of traditional ice cream popsicle stick mold, for a stick kulfi which you can lick.

Leave to freeze for a minimum of 12 hours, and it is ready to be served. Garnish with some almonds and pistachios and/or almonds bits.

It’s a safe bet that you will want some Kulfis to imbue that refreshing touch to cook down in high temperatures. Or maybe you would like chocolate ice cream with saffron?  Tell us what your decision was on our Facebook, Instagram and Twitter social networks.